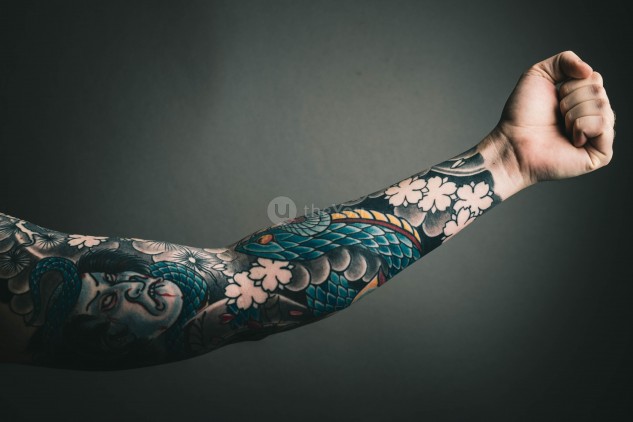 For men, tattoos are one of the forms of self-expression. A tattoo is given a special significance and meaning. For example, an arm tattoo can serve as an amulet, a reminder of an important event, or a message to onlookers. Plus, many men get tattoos to conceal scars and skin imperfections. Let’s look at the most popular styles and design ideas of men’s arm tattoos.

A tattoo is not only an expression of certain symbolism, but also a decoration. A big realistic image draws attention and makes its wearer stand out from the crowd. To achieve a jaw-dropping effect, tattoo artists often combine different styles. Before getting the sketch of your arm tattoo done, study the most common styles, as every one of them boasts a unique application technique.

What sketch to choose for an arm tattoo? First of all, you should decide on the placement. Hands and wrists are perfect for small meaningful tattoos, while a large and interesting scene will look great on the shoulder.

Men’s tattoos of a triangle have several general meanings:

A triangle tattoo on a married man can stand for a strong marriage, a harmonious relationship between partners, and trust for the partner.

Tattoos in the form of symbols can serve as a decoration or a talisman.

Here are some of the most sought-after symbols in men’s tattoos:

Phrases can consist of only one word: ‘Believe’, ‘Fighter’, ‘Love’, and the like, or include entire sentences with a deep or special meaning. Lettering tattoos are often done in Latin, Italian, or Arabic.

In ancient times, people believed that men’s wrist tattoos in the form of a bracelet attract luck, strength, happiness, and prosperity. Warriors wore bracelet tattoos as protection from mortal wounds and defeat. Nowadays, these tattoos also often act as a talisman. Bracelet tattoos can be inked on the wrist or shoulder.

As a rule, small tattoos hold a special, even intimate meaning. This is why they are often inked in places where they can’t be usually seen. Bolder men who want to show the world their beliefs, get small tattoos done on hands or fingers, for everyone to see.

The most popular motifs of small tattoos include:

A tattoo depicting a wolf on a man’s arm primarily represents courage, strength, fearlessness, and independence. People who possess these qualities, hope to enhance them with the help of ink. There are numerous depictions of this wild animal, each with its own meaning. This is why it’s important to consult with your tattoo artist to find the right one for you.

A sleeve tattoo is a large-scale and eye-catching design. Such tatts are usually done in black, but men sometimes opt for color tattoos. Here are some popular motifs:

A sleeve tattoo can be just a decoration or carry a certain meaning. It all depends on the meaning you attach to the design.

A spider tattoo is commonly seen as a sign of wisdom, diligence, and self-control. According to ancient beliefs, spiders represent the comfort of home as they weave their webs only in places where there’s no evil and envy. Some believe that men with a spider arm tattoo are capable of working hard, coping with difficulties, and fighting for their happiness.

Tattoos depicting eyes date back to the times of Ancient Egypt. Ancient Egyptians believed that wearers of such imagery possess secret knowledge, can see into other’s souls and learn their innermost secrets. An eye tattoo on the arm is an often pick of men who are interested in mysticism, magic, and the occult.

Skull tattoos are very popular among bikers, athletes, and criminals. By wearing a skull on the arm, a man might want to say that he isn’t afraid of death and has accepted the imminence of death. A skull with a rose is interpreted as loyalty to his partner until death.

In this case, the meaning of a tattoo depends on a particular design.

The most popular tattoos with women include:

Celtic patterns look unusual and mesmerizing. They consist of one uninterrupted line without a beginning or an end, which represents the cycle of life and the eternity of being.

The main meaning of a snake tattoo is wisdom, serenity, and wealth. Secondary meanings include cunning and resourcefulness. A snake with a skull might denote the temporality of life, with a dagger or sword — mortality, and with an eagle — the eternal fight between good and evil.

Such an arm tattoo is a symbol of strength and power as the dragon is the keeper of treasures and is associated with ancient wisdom, magic, and immortality.

A forest tattoo on the arm symbolizes travel and a search for your destiny. Those who go for a forest tattoo, might want to feel the connection with untouched nature and its primeval power.

An arm tattoo of a lion is a choice of strong and noble, or sometimes assertive and egocentric people. The latter might be true if the lion wears a crown.

Arm tattoos for men are usually concise, clear, and well thought through. Tattoo artists say that any sketch can convey a special, personal meaning a person attaches to it. The most important thing is that the tattoo should appeal to its wearer, reflect his personality, and look aesthetically pleasing.

Check out the theYou gallery of men's arm tattoos and choose the one for you!

Tips
Tiger Tattoo: Meanings and Design Ideas
Prev article
Let’s Do It on Valentine’s Day: The...
Next article
Comments
0