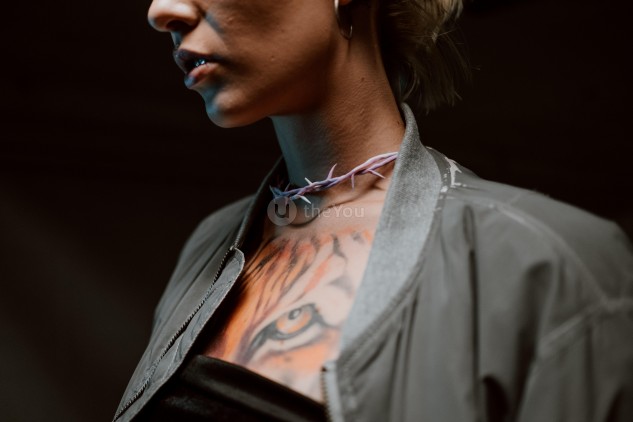 What can a tiger tattoo mean? Why was this motif featured on so many emblems in the past? Why did people ink images of tigers into their skin? What is the meaning of this symbol today? Find out with theYou.

The tiger is a magnificent animal that is often present in the attire of Asian rulers, on knights’ shields and warriors’ bodies. Every culture attaches its own meanings to this symbol, but some are true for them all: this predator is perceived as a protector, a leader, a symbol of valor, decisiveness, and bravery.

An interesting fact: The richest variety of tiger tattoos can be found in Tibet. Locals believe that they descend from a tribe of weretigers. For them, a tiger tattoo is an amulet of their family.

In general, we can distinguish the following meanings of tiger tattoos:

Let’s look closer at some designs and their meanings.

This image symbolizes bravery, power, fearlessness, and readiness to fight. Some Eastern peoples used this imagery as an amulet.

A tattoo depicting a sleeping tiger’s cub is a common pick among girls. This motif is chosen predominantly by women and denotes innocence, serenity, warmth, and readiness to protect your loved ones.

Another popular design among women features a woman wearing a tiger skin, which stands for an inner spark, strength, gracefulness, and courage.

A tiger with its teeth bared indicates that its wearer is an aggressive person capable of defending themselves and their family. They show no mercy toward their enemies. This design is also featured in prison tattoos and shows its wearer contempt for the authorities.

This tattoo is a pick of people who dream of greatness and power and like being in the spotlight. The choice of such a tattoo might speak of a person’s haughtiness. A lion wearing a crown is a more common motif than a tiger.

Only one in 10,000 tigers is born with a genetic mutation that makes its fur white. This is why a white tiger tattoo is meant to say that its wearer is unique, special, and even above everyone else.

This design is all about the fight between good and evil, light and darkness, mind and body, female and male nature, yin and yang, in which the tiger stands for female nature.

This is the sign of people who are keen to reach their goals, are smart and collected.

A paw with claws can speak of aggressiveness, readiness to fight and defend what you love. Claws are also seen as an amulet against evil, disease, and bad luck.

Speaks of a person’s duality. This tattoo might tell you something about the other side of a person.

Choosing a Placement for Your Tiger Tattoo

The main thing you should take into account when choosing a placement for this design is the size of the chosen sketch. The back and chest can fit a large scene, while mini tattoos will look better on wrists, ankles, or behind the ear. Women often get a tiger tattoo inked on the thigh, which looks stunning and sexy. Many men prefer sleeve and calf tattoos. A tiger tattoo on the shoulder is considered a classic.

An interesting fact: Angelina Jolie has a Bengal tiger tattoo on her back and Justin Bieber sports a tiger head tattoo on his arm.

The most popular styles that are chosen for tiger tattoos include:

A tiger tattoo can have numerous implications that can depend on the most minor details. Check out examples of tiger tattoos in the theYou gallery and choose the one for you!