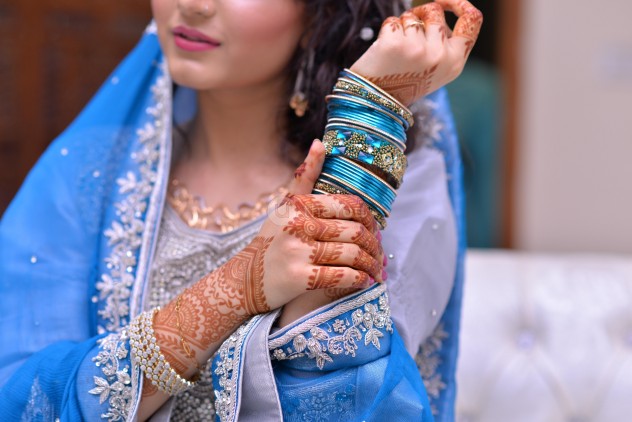 Decorating skin with natural dyes emerged as a trend in the world of body art in 2015: ladies everywhere started decorating their skin with intricate patterns, and beauty salons added temporary henna tattoos to their services. The mehndi art is over 5,000 years old. In this article, we will look at the significance of this ancient art, ways of henna application, and meanings of common patterns.

The first mentions of using henna on the body in the East date back to more than 5,000 years ago. Natural pigments were used as antibacterial products: they protected the skin on hands and feet from heat, cracks, and infection.

The tradition to draw ornamental patterns on the body — mehndi — emerged later. It became popular among women and men of Assyria. Ancient Greece, Babylon, Mesopotamia, and the Roman Empire. The fashion for body art in the mehndi technique spread across Islamic countries, where religion forbids any body modifications, including permanent tattoos.

Mehndi patterns in Arab countries, India, North Africa, Malaysia, and Indonesia carried different meanings. The choice of patterns was wide, and their meanings versatile. They were used as wedding and religious symbols, to attract luck, ward off evil spirits, ask higher forces to give a family a child or to grant another wish, etc. Every mehndi pattern bears a sacred meaning, a message to the Universe.

Interesting fact: In Eastern counties, a new wife is exempt from domestic chores until her bridal mehndi patterns fade away.

Let’s look at the pros of temporary henna tattoos:

Styles of mehndi designs differ from region to region.

This style is all about bold lines, clear geometric patterns, and floral motifs mostly on the hands. Its distinctive feature is full coverage of soles and palms.

This style features chaotically arranged small flowers that comprise an entire scene as well as fruit motifs and imitations of rings on fingers.

This style of mehndi offers similar variations of body designs as in the Indian one with prominent floral motifs. The difference lies in full coverage of the sides of feet, palms, and fingertips.

European artists adopted various features of the abovementioned styles and motifs, combining them and attaching new meanings to them.

Mehndi Patterns and Their Meanings

Hands — fingers, wrists, palms — are a traditional placement for mehndi tattoos. These patterns are also often done on feet, from ankles to toes. Henna tattoos on shoulders, neck, back, and thighs are a recent trend.

Let’s look at some common patterns:

Henna is green powder smelling of hay that is made from leaves of Lawsonia inermis.

Henna comes in the following colors:

Natural henna turns into brown paste when mixed with water. This is a safe dye.

There are no such things as white and black henna in nature.

‘White henna’ is a mixture of hypoallergenic acrylic dye with an adhesive agent that enables the dye to be applied to skin. It is also safe.

As for ‘black henna’, it can be either a mixture of henna and basma made from leaves of Indigofera tinctoria or a dangerous dye with PPD (paraphenylenediamine) that is used in hair dyes. Dyes with PPD can cause blisters and sores on the skin. Let’s learn how to recognize this dangerous dye.

The shelf life of henna dye is 12 months. Homemade paste can be stored for 2-20 days. The advantage of a DIY paste is that you can regulate the shade with the help of strong tea, coffee, essential oils, or lemon juice.

Important! No matter what henna you choose, do an allergy test before starting to apply the pattern. Make a line of henna on your skin and wait for 20 minutes. If there’s no reaction — go for it.

If you want to do a henna tattoo at home, check out our step-by-step guide.

What is mehndi: a trendy form of body art or an unusual good luck charm? Interpretations differ from person to person. Nowadays, henna tattoos are an original and safe alternative to permanent tattoos and a perfect option for those who love variety and value freedom of expression.